Let me send you the FREE- Kindling Fire eBook- YOU CAN CERTAINLY DO IT! 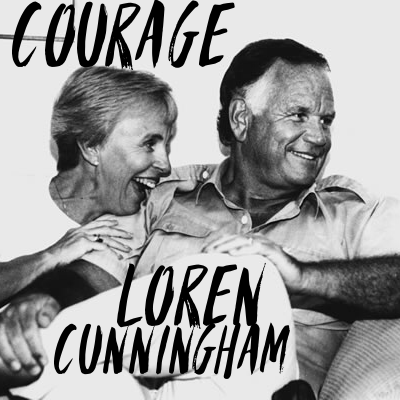 Loren Cunningham had the courage to walk away from what was good to pursue God’s best as a young man in his 20’s. He left the security of family traditions, his denominational heritage and an opportunity for a wealthy secure future to purse God’s dream over his life.

Loren is my #1 hero in the faith. He is the founder of Youth with a Mission. He received a profound vision from the Lord while on a short term mission trip in 1965. The vision was waves crashing on the shores of nations around the world. As soon as the waves crashed on shore they turned into young people. God was commissioning Loren as He had his Parents & Grandparent before him to extend God kingdom through missions. But Gods call was to do missions in a innovative way at the time. It was unheard of at that time for young people with limited training and life experience to do missions. It was out of the box and was viewed with great skepticism by other Christian leaders.

Here is where Loren’s courage really kicked in. God had entrusted this vision to him and shown him early fruit of this God inspired approach to extending Gods kingdom through young people who for practical purposes didn’t know much but were open for God to use them.

If he followed Gods call he could be blackballed and maligned to  every church this denomination was apart of. He could be accused of not honoring his parents who were known pastors in the denomination or his grand parents were also know pastors in this denomination.  They could clearly say he was not submissive to Church authority & did not have the backing of the denomination and had gone ‘rogue’. The pressure was real! The opportunity for mis representation of his intentions or motives also very real! Isn’t just like God to put us in similar situations and ask us to Follow Him! It takes courage to follow Jesus and not everyone, even close friends and family will alway support you or understand.

For a faith based ministry YWAM to lose all the support would hang him out to dry regarding raising financial support to live off of & run the ministry if he left the denomination to follow God’s call. To make it worst his very wealthy uncle offered him a job at his company that would have financially set him up for life as an alternative to following God call.

Loren courageously & graciously parted ways with this denomination to follow Gods specific call & turned down his uncle’s chance if a lifetime offer. He sensed whet God wanted to do was bigger than one denomination.

The fruit of this courageous decision is YWAM has full time missionaries all over the world across many denominations. He did not take the safe path but he courageously took Gods path and God honored his decision. Following Jesus will not always result in everyone supporting and agreeing with you. If you continue to follow courageously, graciously, humbly, with a thick skin and a tender heart the Lord will have favor on you and all you put your hands to.

For more on Loren’s incredible faith inspiring story check out his biography- Is that really You, God?

7 things I learned from leaving everything to follow Jesus

Lost and Found at the Breath and the Clay

The Ox and the Wild Horse

Gaining Mojo from One Good Day

Don’t Be in a Cover Band

Great reflection, Troy. I’ve thought before of that courage it took Loren as well. God has been absolutely faithful to provide for him and his family wherever they have gone. I’m not sure that his mission organization includes thousands of denominations. Probably dozens. It is mine-blowing though!!

ha! I should probably edit that one 😉 good catch. Hope you guys are doing great. Our Son (AVI) is in YWAM-Kona right now in the Awaken DTS. Hopefully, you’ll get to meet him.

Great! I’ll look for him. BTW Avi is a great children’s author.

Let me send you the FREE- Kindling Fire eBook- YOU CAN CERTAINLY DO IT!